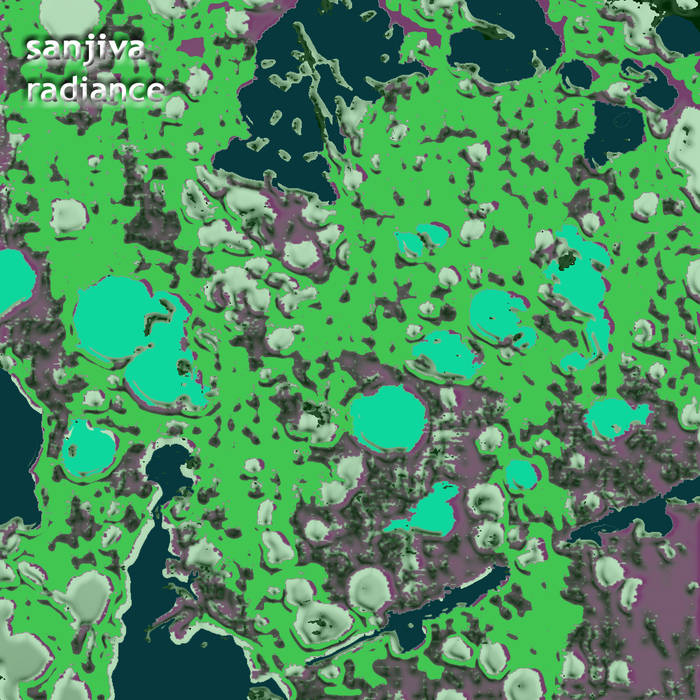 Sanjiva is an artist from Canada who records on Germany's 96 Sounds label. He carries an air of mystery about him, and his catalog of five albums each has spiritually cryptic titles, like "Essence," "Origin," - which were his first two, very upbeat, releases - "The Journey," "Initiation," and now, with his latest energetic effort, "Radiance". His first releases were very techno sounding, with hard-driving rhythms and little space between the notes. On "The Journey," which attracted a lot of attention through radio airplay on syndicated shows nationwide, Sanjiva let the air out a bit and floated through cruiser speeds into more evocative spaces and atmospheric layers of sonic bliss.

On "Radiance," like his recent "Initiation," the opening tracks are extremely compelling, with bright, percussive sound textures and percolating rhythms that are equal parts intense and attractive. As the tracks progress (and there are only five of them, ranging from 5 to 18 minutes), Sanjiva's spatial charm is revealed with ambient washes of spiralling synth patterns and a colourful palette of sound designs that shimmer and reflect sunlight through a misty haze like crystalline shards. The closing track on "Radiance," called "The Fountain of Nothingness" rises from deeper tones into a freefall feeling of sacred discovery, innocence and mystery, as the cosmic wheel turns slowly on its axis to reveal the source within. Journey with Sanjiva, and your spirit, mind, dancing feet and soul will all be nourished and cleansed.

Germany's 96 Sounds is an exciting label that has, unfortunately, ceased operations. Genuine, Jorg Schaaf, Bjorn Fogelberg, and Sanjiva have been highlights in past catalogs, and this Sanjiva title, in particular, is a real gem. Fans of Global Communication and Synaesthesia will find much to like here, starting with the upbeat electronics, in a distant T. Dream vein, and the drifting spaciousness that enters in the second half of the CD. Long tracks make this import title, which is one of five Sanjiva titles that we offer, a CD to play extensively, as it is filled with compelling beats and enough space to satisfy most ambient travelers.

Review by - M. Tye Comer: CMJ New Music Report Issue: 585 - Aug 31, 1998
Sanjiva is a Canadian producer whose commitment to sensual electronic sounds is directly related to his belief in music as a key to healing, meditation, and introspection. Radiance is a 57-minute journey of spiritual, blissful ambience that uses pulsating trance rhythms and serene ambient textures as its vehicle of transport. A mesmerizing, stimulating and enlightening piece of work.

Review at Wind and Wire © 1998
I first became aware of Sanjiva´s music from Waveform´s interesting Slumberland compilation, so I was quite eager to listen to this. Because Radiance is actually his fifth album, it looks as if I have some catching up to do. Radiance consists of five interwoven titles. Although each movement is distinct, there is enough overlap during the transitions that there no clear dividing lines separating each track. it begins in techno fashion with an energetic pulsing beat thumbing the rhythm while a sound like swarming insects buzzes about one’s ear. There are a few distinct elements (e.g., the "swarming," thumping beat, crystal tones) assembled into this opening, but I found it very interesting the way Sanjiva allows these elements to fade out and reappear at varying intervals. The result is something that has the characteristics of having repetition without boredom.

After approximately fourteen minutes of this, the tone darkens a bit, leaving us with a slightly muted thirteen minutes of mesmerizing rhythms, pulses and tones. One insistent beeping melds into the third movement, a beautiful and brief piano number. Things settle quite a bit for a momentary adjustment before entering the final portion. This final movement titled "Fountain of Nothingness," came as an unexpected contrast to the first half of this album. All rhythm dissolves, leaving behind a droning organ sound that shrouds this nocturnal ambient title like a blanket of fog at midnight. I get the feeling of being tucked into bed and having the lights turned out after experiencing a rousing day of fun. Pleasant dreams!

Review at URB ultra american -crafted culture journal vol. 8, no. 59, 1998
In the last few years, ambient music has had a bad time of it. Like psychedelic trance, it has often been dismissed as mushy indulgent hippy nooding; it´s been felt that unless you’re being "illbient", banging on pots and pans, you can’t really have anything to say. And let’s face it, he doesn’t help the case along with the dippy cover art or to be honest, the album title. In fact, bearing in mind the guy’s Canadian, he could have chosen a name for himself less likely to set bullshit detectors ringing. But all is forgiven when you slip under the surface and listen - this harks back to the great days of Apollo, FAX and SILENT - it is really that good. It’s not beatless, but when they’re there, the beats are soft warm heartbeats a la "Analogue Bubblebath". It’s a gorgeous, delicate, melodic, fragrant, gently pulsating womb of sound. It can be as soothing or as thought provoking as you want it to be, which is, to vaguely paraphrase Brian Eno, what ambient is all about.

Review at Thousand Words, September/October 1998, Issue19
On Sanjiva´s fifth album, the Canadian-born producer gets away from the hard beats and lets the nuances take control over the five cuts that make up this full length. Electronic ambience floats through cuts with names like "Fountain of Nothingness," "No Zone" and "Left Behind." These tracks kind of melt in your mind, transporting through repetition and sweeping sound patterns. Unlike most other releases of this sort, this one actually keeps the interest throughout and begs to be played repeatedly. Something about the way these tracks are strung together, in almost thematic progressions, makes for the most interesting sonic wallpaper. Maybe being a trained piano, guitar and flute player and spending 10 years in India had something to do with it. Anyway, Chill out with this, you may not need any other aid(s).

www.amazings.com/reviews
Radiance is the latest album by Sanjiva. It has been published by Ninetysix Sounds and is anew demonstration of this author's electronic ambient style. The CD contains 5 long tracks. The Canadian musician has composed a product which can be perfectly useful for relaxation: the cosmic textures and the diverse palette of electronic sounds are a really pleasing and highly listenable mixture. 57 minutes of intense and hypnotic music provided by a master of synths.

www.backroadsmusic.com
Germany's 96 Sounds is an exciting label that has, unfortunately, ceased operations. Genuine, Jorg Schaaf, Bjorn Fogelberg, and Sanjiva have been highlights in past catalogs, and this Sanjiva title, in particular, is a real gem. Fans of Global Communication and Synaesthesia will find much to like here, starting with the upbeat electronics, in a distant T. Dream vein, and the drifting spaciousness that enters in the second half of the CD. Long tracks make this import title, which is one of five Sanjiva titles that we offer, a CD to play extensively, as it is filled with compelling beats and enough space to satisfy most ambient travellers.

motion.state51.co.uk/reviews/156.html
Analogue Acid lines which buzz like exposed transformer wires... a inwardly-spiralling trance pulse... mantric bands of unsullied electronics, clean, crisp and cutting... Germany's Sanjiva is a student of a the lost art of Trance. This is Trance unpolluted by the fluorescent hallucinogens of the Goa set, uncorrupted by breakbeats or breathless BPMs. Sanjiva's deep and reverberant melodies radiate and coruscate like concentric waves emanating >from an electronic eye. They display the characteristic behaviour of particle-waves, rippling across stacked parallel planes, undiverted and driven independently toward some terminus which lies just beyond the signpost of Infinity. Radiance is an unbroken journey, with such movements as the elegiacally sparkling "No Zone" and the majestic "Wisdom Field" providing well-timed delimiting phase shifts in the album's horizontal narrative. The final leg, a beatless stretch of supernal Synthesizer-Age organum named "Fountain of Nothingness," recalls nothing so much as the chromatic time winds and vortices of Trance pioneer Klaus Schülze and his out-worldly radiant dawns.

With bits of eerie aerial countenance, Canada's resident ambient-philosopher lays out five pieces of varying length and intensity. Radiance combines spiralling and hypnotic transcendentalism with familiar beats that are as intense as they are attractive to the ear. Perfect for music-induced relaxation, or just as effective for extraneous environmental sound impedance.

Composed and performed by Sanjiva